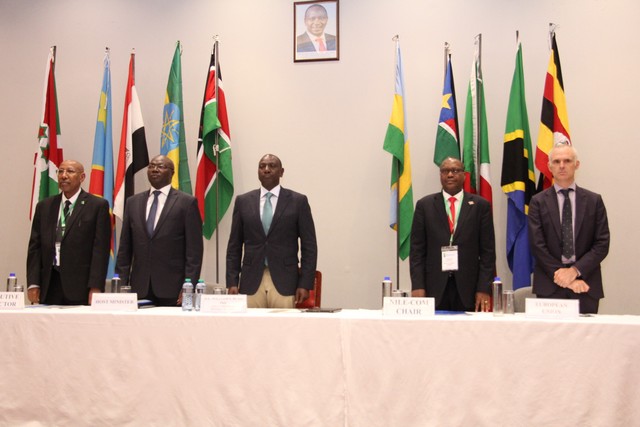 H.E Ruto was speaking during the opening ceremony of the Annual Nile Council of Ministers meetings (Nile-COM), at which Kenya took over chairmanship of the NBI from Burundi. H.E. Ruto used the opportunity to announce that his country intended to convene a second Nile Basin Heads of State Summit. The inaugural Heads of State Summit was held in June 2017 hosted by Uganda’s President Yoweri Museveni in Entebbe.

Addressing the gathering as outgoing Chairperson of the Nile-COM, Dr. Deo-Guide Rurema, who is also Burundi’s Minister of Environment, Agriculture and Livestock, encouraged Member States to continue working towards finding lasting solutions to the various challenges in the Nile Basin.
“The delay in agreeing and adopting a legal and institutional framework has resulted in delays in the establishment of the permanent Nile River Basin Commission. It is my sincere hope that Member States will take bold steps towards adopting a common framework that will raise our level of engagement and facilitate harnessing benefits of the cooperation,” he said.

Speaking on behalf of NBI’s Development Partners, H.E Amb. Simon Mordue, Head of Delegation of the European Union in Kenya, noted that the monitoring network will become a key tool to manage the nexus between water security and the needs for irrigation and hydropower.

“Ultimately, it will inform the political negotiations over water use and benefit sharing with reliable, non-biased technical data… The hydrological monitoring system has a potential of becoming the backbone of transboundary water cooperation in the Nile River Basin,” he said.

The Nile Basin Regional HydroMet Project will be implemented over a three-year period (July 2018 – July 2021). The project is implemented with technical and financial support from the European Union and the German federal government, through GIZ.

The ministers also approved the work plan and budget for both the Secretariat based in Entebbe, Uganda and NELSAP-CU, based in Kigali, Rwanda responsible for preparation of investment projects for the Nile Equatorial Lakes countries.

Find out more about the Nile Basin Regional HydroMet project:https://www.nilebasin.org/images/docs/Hydromet_Success_Story.pdf