Welcomed by the staff of the NBI Secretariat led by the Executive Director, Eng. Sylvester A. Matemu, Mr. James Macbeth was accompanied by Dr. Malte Grossman, GIZ Uganda’s Head of Projects for Transboundary Cooperation in the Nile Basin.

During the visit Mr. Macbeth & Eng. Matemu signed a financing agreement for support of NBI programs for the next 3 years.The new three-year €6 million funding phase focuses on three areas: sharing hydrological data from the HydroMet Project with Nile Basin Member States; coordination of dam and reservoir operations; and the Nile Basin Investment Program. 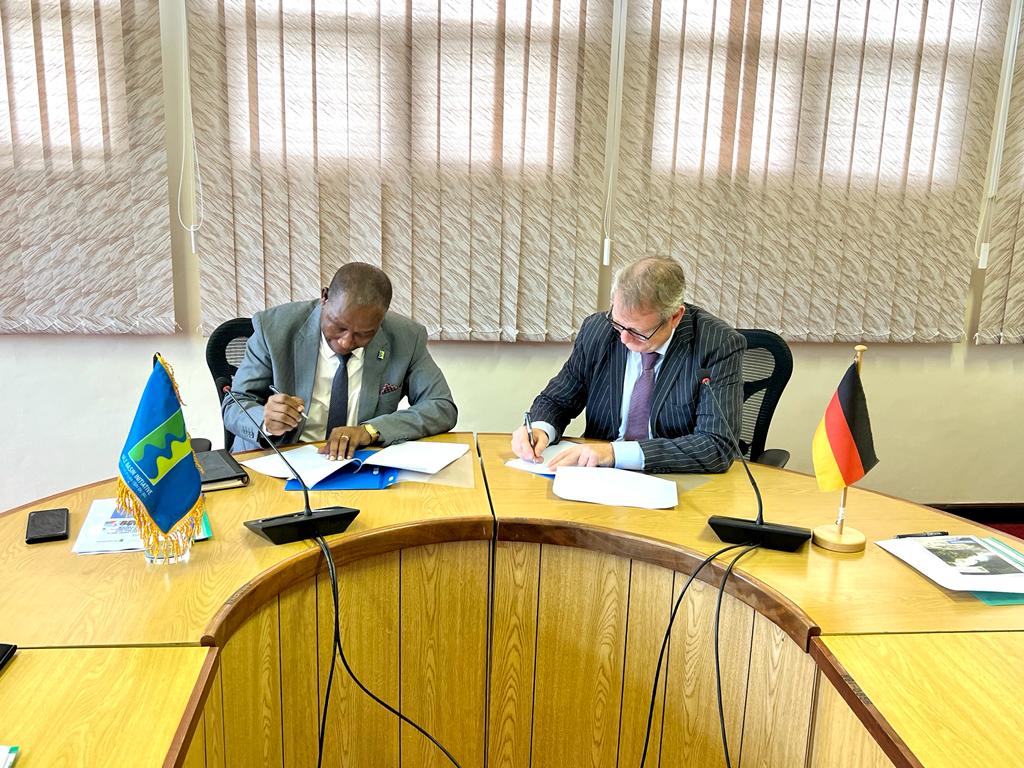 Eng. Matemu highlighted that NBI has enjoyed a longstanding collaboration with GIZ, dating as far back as 1999, when NBI was established. He added that NBI started receiving financial support from GIZ in 2002 and in the first 15 years that followed, this support has resulted in – among other achievements – the setup of the NBI library, which has risen to become a key source of technical information on the Nile for the whole region; funding for the policy component of the Water Resources Planning and Management Project of the Shared Vision Programme, out of which transboundary policies were born. These transboundary policies are now a key tool for facilitating Nile cooperation and building Member State confidence in the concept of joint action and benefit sharing. Over the years, GIZ has also provided support towards capacity building, training, support for institutional strengthening and supporting NBI’s sustainable operations. 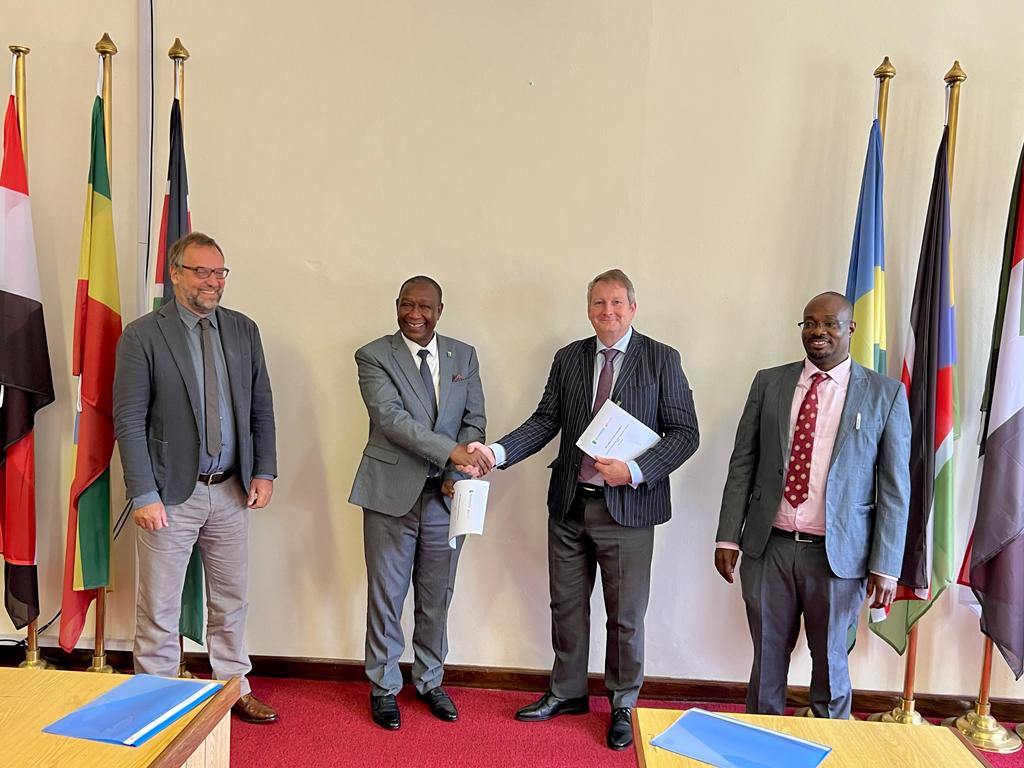 Eng. Matemu also emphasized that the recent support from GIZ and the German government of € 13.5 million which closed this year, has been critical in entrenching the spirit of cooperation among Nile Basin Member States. Key achievements to highlight within this six-year period include: support towards the development of the NBI 10-Year Strategy (2017-2027) and other strategic action plans which are all currently playing a guiding role in all of NBI’s work; strengthening the communication and stakeholder engagement function to ensure that Basin citizens are fully engaged in transboundary water cooperation matters; strategic water resources assessments to improve understanding around the dynamic relationship between water demands and supply and the measures countries can take to ensure sufficient supply in the face of increased pressures on the resources; support for the development of the Nile River Basin Management Plan – which is the very first Basin-wide plan – that provides the framework for all future sustainable transboundary management and development undertakings; support for the Nile River Basin Investment Program, which functions as a key tool for implementing the Basin Management Plan; implementation of the wetlands project aimed at mapping them, understanding the pressures they face, and kickstarting a conversation regarding their conservation and protection; promoting dialogue among Member States by supporting various dialogue platforms such as Nile Day, Nile Basin Development Forum, in addition to supporting training in hydro-diplomacy.

As Head of Projects, Transboundary Cooperation in the Nile Basin, Dr. Malte Grossman emphasized that the German government is a loyal partner and firm believer in Nile cooperation and that NBI has managed to set a high standard on river basin organizations as seen through the good practices shared thus far.

Mr. James Macbeth, the GIZ Country Director stated that the unique niche NBI occupies as a platform for dialogue goes to the core of Member States’ interests saying, “No country is on its own when resolving problems.” He concluded his remarks by saying he has a lot of respect for NBI and what it does and that GIZ is pleased to continue contributing to NBI’s success and achievements.

Following a cordial engagement with NBI staff, Mr. Macbeth rounded off his visit by planting an indigenous tree in NBI’s backyard, which overlooks Lake Victoria. 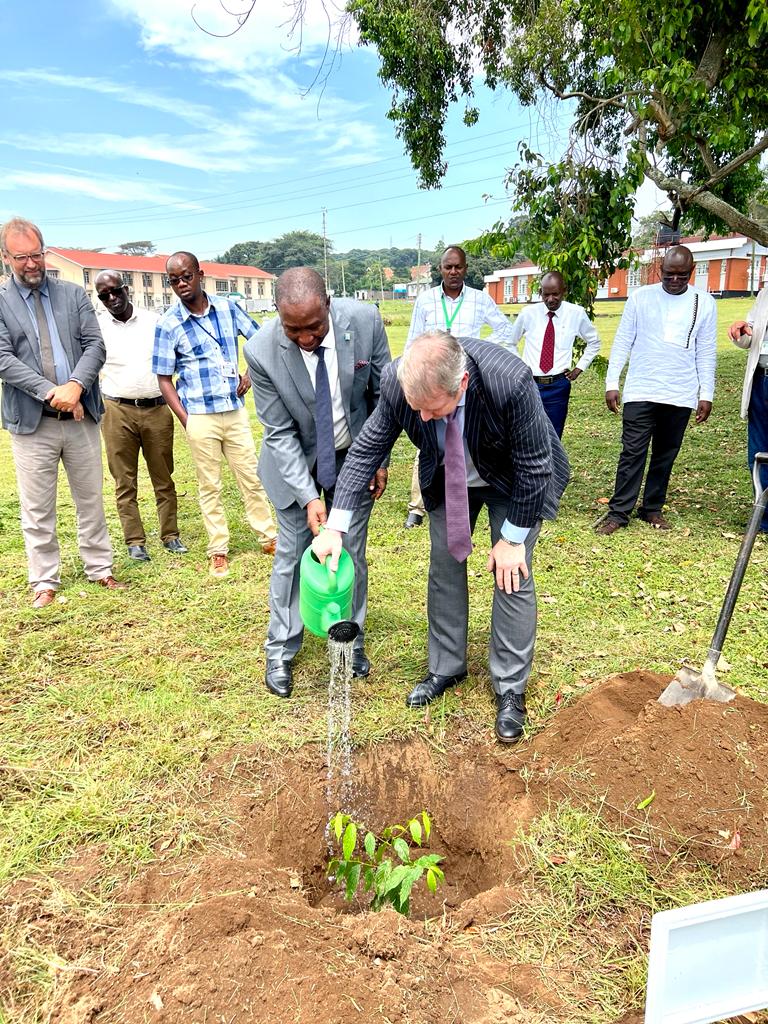