pdf Water Use Infrastrcture in the Nile Basin Popular

Water Use Infrastrcture in the Nile Basin.pdf 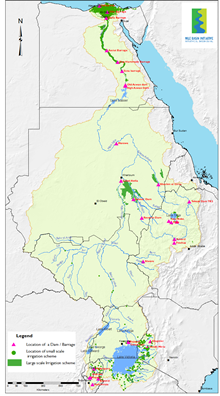 Water use is simply the amount of water used by a country or other lower entity such as a household.
Some of the varied uses in the Nile basin riparian states include hydro-electricity generation,
Municipal and Industrial water supply, agriculture, fishing, recreation, transport, tourism and
waste disposal.

Agriculture is a major livelihood strategy in the Nile Basin, sustaining tens of millions of people.
It provides occupations for more than 75% of the total labour force and contributes to onethird
of the GDP in the basin. An estimated 5.4 million hectares of land is under irrigation basin-wide, where over 97% of this
area is in Egypt and Sudan. The actual area cultivated on average is approximately 6.4 million
hectares. The total estimated annual irrigation water demand for irrigation is approximately 85BCM; the actual basin-wide withdrawal
of water from the Nile for irrigation is estimated as 82.2BCM.
The topography of the Nile provides opportunities for power generation, especially Ethiopia. Hydropower is a major water user in the Nile,
relying on water passing through turbines to generate electricity. Most power plants within the Nile are run of the river.