Natural hazards such as floods and drought have become more prevalent in the Nile River Basin - as a result of climate and weather changes - resulting in massive disasters which drain communities economically, physically and environmentally.

Wetlands are naturally productive ecosystems which are capable of managing the risk of disasters to communities. They can contain flood water, which helps cushion communities against floods. When there's drought, they release the water which supports livelihoods. Aside from their buffering effects, wetlands also act as water purifiers.

The Nile river basin has a complex system of wetlands in 11 countries, namely; Burundi, DR Congo, Egypt, Eritrea, Ethiopia, Kenya, Rwanda, South Sudan, The Sudan, Tanzania and Uganda. These wetlands provide not only physical benefits but also ecosystem services, which sustain the local communities directly or indirectly dependent on wetlands. They supply water for both domestic and commercial use and provide food including fish and wild plants. The wetlands are also home to charismatic birds and wild animals and give authentic aesthetic experiences, which are key to the development of tourism.

The Sudd Wetland, which is the largest freshwater wetland in the Nile Basin and is also one of the largest flood plains in the world, extending up to 130,000 square kilometers during rainy seasons, boasts over 100 fish species, 400 bird species and an important stopover site for water birds including a significant number of migratory bird species. The Sudd wetland has been designated as one of the wetlands of International importance and has a large natural resource base which supports agriculture, livestock, fisheries and wildlife. Additionally, Sudd Wetland is critical for the basal water flow of river Nile benefiting associated biodiversity and livelihoods, especially of downstream communities.

Despite all the benefits offered by these wetlands, they continue to be heavily fragmented, degraded and reclaimed due to human activities such as encroachment for settlement, conversion into agricultural lands owing to population pressure, grey infrastructural development and poor implementation of policies protecting wetlands. The continued destruction of wetlands only works to compromise their health and integrity and consequently, are unable to execute their functions as natural buffers against natural disasters.

The Nile Basin Initiative is working towards the maintenance of healthy wetlands and restoration of degraded ones as this is imperative to disaster risk reduction. At the 2016 inaugural Nile Basin Wetlands Forum, which was attended by representatives from 10 member states and other key stakeholders, participants identified a number of challenges. These range from inadequate governance instruments, infrastructural and agricultural encroachment, minimal trans-boundary collaborations within the Nile Basin trans-boundary wetlands and inadequate baseline information. The possible inspiring interventions proposed include building baseline information, restoration of the wetlands, development of a Wetlands Atlas, wetland management and investment plans, economic valuation of wetlands and their associated resources, enactment of national policies and legislations and re-awakening of dry land wetlands. These interventions would boost wetlands' capability in disaster risk reduction and ultimately build resilience. NBI will be working towards scaling and replicating these interventions in trans-boundary wetlands and wetlands of regional significance.

Nile Basin Initiative in collaboration with German Development Agency (GIZ) is implementing a programme under the theme of Biodiversity Conservation and Sustainable Utilization of Ecosystem Services of Wetlands of Trans-boundary Relevance in the Nile Basin. The main goal of this programme is to strengthen the technical and institutional capacities of riparian States and other stakeholders for sustainable management of these wetlands for benefits stated herein. Strategically NBI Wetlands work is anchored on The Wetlands Management Strategy developed in 2013 and focused on providing direction on sustainable utilization of Nile Basin Wetlands. Additionally, Nile Basin Initiative Wetlands work is geared towards supporting the riparian states meet their obligations under Ramsar Convention, Convention on Biological Diversity, Climate Change Adaptation and Sustainable Development Goals. 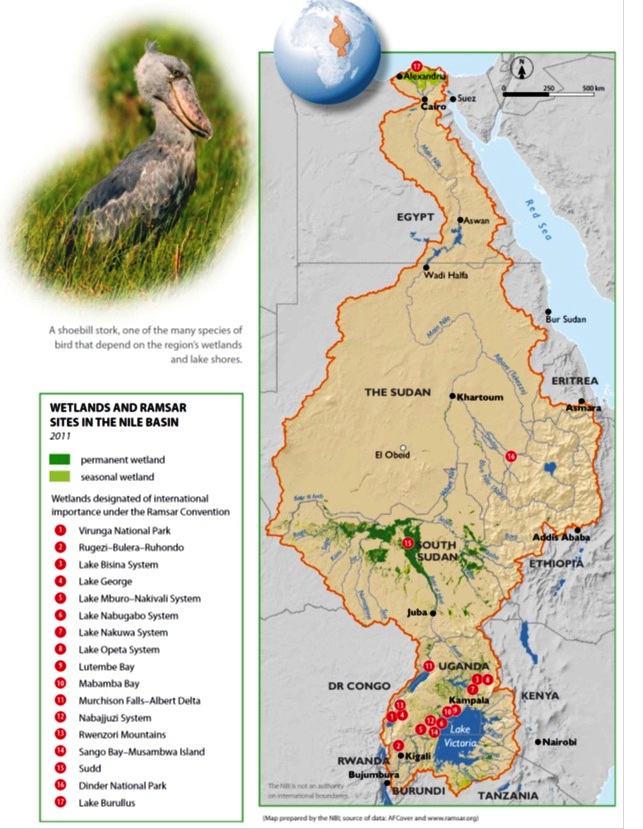