The Water Resources of the Nile Basin

The Nile Basin is characterized by high climatic diversity and variability, a low percentage of rainfall reaching the main river, and an uneven distribution of its water resources. Potential evaporation rates in the Nile region are high, making the basin particularly vulnerable to drought.

White Nile flows only contribute up to 15 per cent of the annual Nile discharge, but are fairly stable throughout the year. The Eastern Nile region supplies up to 90 per cent of annual Nile flows, but its contribution is highly seasonal.

Extensive regional aquifer systems holding substantial quantities of groundwater underlie the Nile region. Some of the aquifers hold fossil water, but others are recharged from precipitation over the basin, or from irrigation areas and the base flow of the Nile. Groundwater is the dominant source of domestic water supply in rural communities across the basin.

The quality of the Nile waters has generally deteriorated because of population growth, intensification of agriculture, and industrial development. Across the basin, environmental sanitation is poor, resulting in bacteriological contamination and nutrient enrichment of the Nile waters. While the quality of large parts of the Nile system – in particular in the sparsely populated areas – remains acceptable, localized high pollution is experienced mainly around urban centers.

The headwater regions of the Nile are subject to widespread soil erosion. Sediment yields are particularly high in the Eastern Nile sub-basin, which contributes 97 per cent of the total sediment load. Most sediment is captured in reservoirs in The Sudan and Egypt, which leads to a rapid loss of reservoir storage capacity.

The finite Nile flows are now fully utilized for agricultural, domestic, industrial, and environmental purposes, while water demand continues to rise steadily due to population growth and economic development. 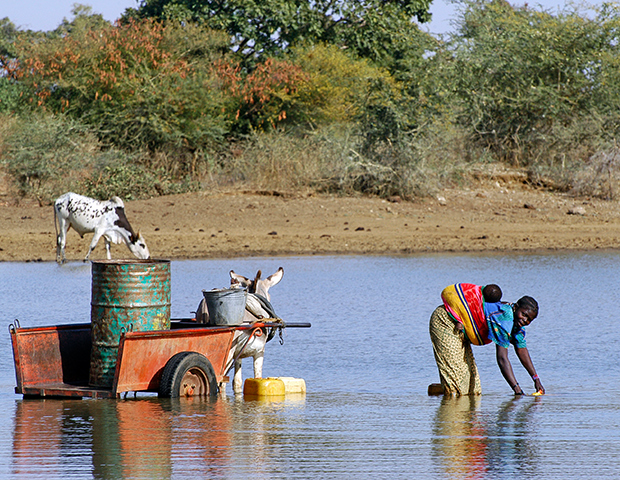 Irrigated agriculture in Egypt and The Sudan represents the single most important consumer of the waters of the Nile, but the upper riparians are planning investments that will use the river’s renewable discharge and present challenges concerning the equitable appropriation of the Nile water resources amongst the Nile riparian countries.

Recommended regional-level actions for consideration by the Nile riparian countries include the restoration of degraded water catchments that are critical for sustaining the flow of the major Nile tributaries, restoring badly degraded lands that export large quantities of sediments and cause serious siltation in the Nile tributaries, and establishing a regional hydrometric and environmental monitoring system